Catching Up And Day 1 of Vacation - Tuesday! 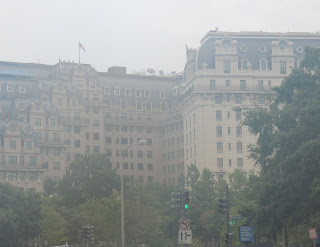 It has been some time since but my last post but in my defense we've had a 10 day vacation, an extended family crisis and a week of catch up and appointments.  Thankfully today hubby is at a car show at the Iowa Speedway with our car, Keith is patiently (not) waiting for the big Iowa vs. Iowa State football game on t.v. and I am enjoying an afternoon of catching up laundry and finding a little time for a blog post.

You will be happy to hear that I am not going to share it all in one post - after all I ended up with over 1,900 photos.  Again in my defense I took many black and white photos hoping that I might end up with one good enough to enter in the 2014 Iowa State Fair.  Every photo next year must be in black and white as they are doing a Salute to Ansel Adams.  I'm already learning some things about photographing in Black and White.

The photo at the top of the page is the hotel where we stayed - The Willard Intercontinental.  Quite a lot of history has taken place at this hotel.  In 1861 Abraham Lincoln stayed 10 days before his inauguration.  In 1861 Julia Ward Howe watched Union soldiers march past.  She awoke the next morning and wrote the Battle Hymn of the Republic (a song I adore as I graduated from Abraham Lincoln H.S. and it is played by the school band at the beginning of every graduation ceremony).  In 1942 The Willard hired the first girl bell captain in WA.  1956 Senator John F. Kennedy speaks at a Conference on Vietnam luncheon.  1963 Martin Luther King, Jr. finishes writing his I Have A Dream Speech the night before the march.

The hotel had a gorgeous lobby.  The view from our room was much prettier at night.  First hotel I've ever stayed at with a doorbell on the door. 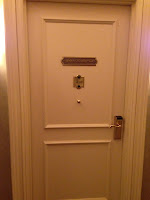 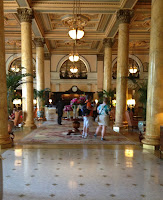 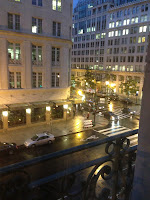 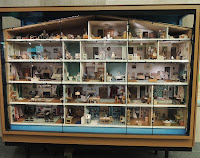 The first day we went through a couple of the Smithsonian museums - American History and Natural History.  We enjoyed both museums a great deal and each had our favorite exhibits to see.  I would say my favorites were the First Lady's Exhibit which included the dinnerware chosen by each First Lady as well as the Julia Child exhibit but also enjoyed Faith Bradford's dollhouse.  As well as this sewing kit, from a soldiers supplies they carried in war also known as their "housewife". 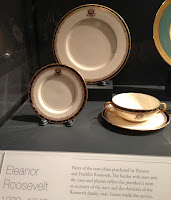 My favorite gown in the First Lady Exhibit belonged to Caroline Scott Harrison (1889-1892).  She was praised for her modest wardrobe (not sure about that looking at this dress) and her inaugural gown and the rest of her wardrobe were made in the United States (I applaud this).

My favorite dinnerware pattern was the set ordered by Eleanor Roosevelt (1933-1945) made by Lenox. 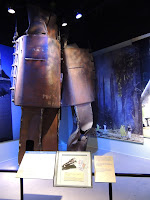 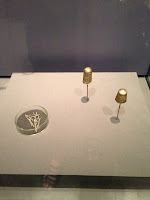 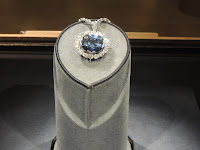 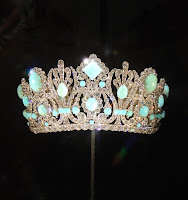 This is the Hope Diamond and the tiara was given by French Emperor Napolean to his 2nd wife, Empress Marie Louise.  Stunning!   I also found these thimbles (1625-1650) and straight pins (Late 17th Century). 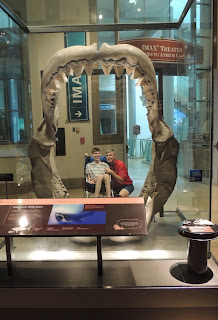 These are just a very small sampling of the things that delighted us on our first full day in Washington DC.  I will admit to purchasing a photo album that will hold 200 photos with room for journaling for each picture and my first attempt to condense my 1900+ photos down to the 200 was a dismal failure.  It looks like I will be buying a second book to condense down to 400 photos after all I do need to be fair and include those photos that are favorite of Bill and Keith's as well.

I've finished another cross-stitch project since last post and it is already at the framers.  I took my stitching along to DC and actually ended up with a 1/2 day to stitch as Bill had a migraine one morning.  I also started another small project while there.  I've also started working again on my WIP by Primitive Hare which is Red Riding Hood. 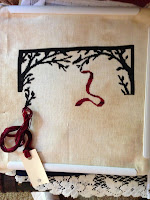 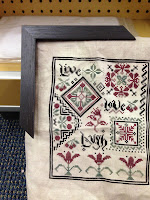 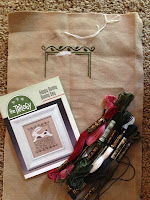 Well, off to get some work done.  I will continue to catch up and share my vacation over the next several posts.