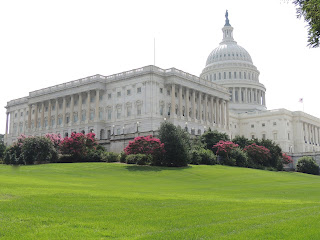 Day 3 of our vacation was a truly amazing day!  I apologize in advance for it being such a long post.  As it is, I've already decided a second post will be needed to cover everything we did on this day.  You see on a whim at about 6:45 p.m. we decided to take the night bus tour of the monuments that began at 7:30 pm (but more on that later).

It was the day scheduled by our Senator's office to tour the U.S. Capitol.  Even though Bill's back was at the end of his ability for long walks - we did make one last long walk up to the Capitol.  As our tour was not scheduled until 2:30, we spent the morning exploring the grounds around the Capitol.  The above photo is actually my favorite I took outside the Capitol.  It shows just a corner of the Capitol from the front left side.  I thought it looked so beautiful with the green grass and blooming bushes. 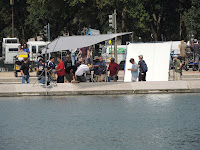 When we arrived, there was a film crew actually shooting something there.  We have no idea if it was a t.v. show, movie etc.  Funny thing was it seemed like there was a lot of standing around and not a whole lot going on.  It was another hot day and most of them looked pretty miserable. 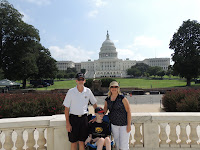 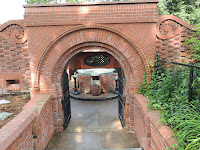 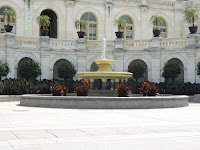 This is a gorgeous fountain located right in front of the Capitol straight down from its' dome.  There was this little gated open building on the grounds as well with another lovely fountain.

After exploring the grounds outside we went into the lower level and explored the Visitor Center.  There is an Exhibition Hall in there with some wonderful exhibits to see - alas photography not allowed.  However, there were some marvelous statues on display in the main hall of which Sakakawea was my favorite.  If you've never read the book about her guiding the expedition for Lewis and Clark, I think you should add it to your list.  You can visit www.visitthecapitol.gov/exhibitions to find out more about the artifacts on display. 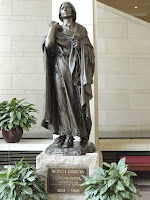 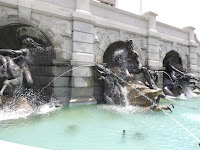 After a lunch in the cafeteria we ventured out into the heat again for a bit more exploring before our tour.  We stopped by and took a couple of photos at the Library of Congress.  We did not get into this building.  It was a grand building to look at with a huge fountain in front.  I'll not show you the closeups of the statues in the fountain so as not to offend anyone but they were very beautiful!

From there we wandered by the US Supreme Court Building and we could see it was under some work - in fact I don't have a photo as there was a photo canvas of the building covering the entire front.  Imagine our surprise as walking by that the security out front called us over and said we could actually go in and tour it.  I never dreamed it would be a building you could tour.  I took a few photos of exhibits but by far I was mesmerized by the two marble and bronze spiral staircases.  They are 5 stories tall and are only supported by the overlapping steps and their extensions into the wall.  Amazing! 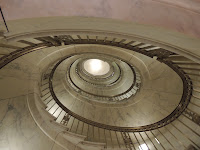 From there we headed over to the Hart Building to Senator Grassley's Office to meet up for our tour.  If you ever make the trip, I highly recommend going through your Senator for a tour as it is so much more personal.  There we 7 of us total for our tour and the ones purchased at the Capitol had like 40 people in them and everyone had to wear headphones to hear the guide.  I so enjoyed all the history (Emily) our staffer shared with us during the tour.

The first photos are from the lowest level of the Capitol.  I was truly dazzled by the arched ceilings and chandeliers found here. 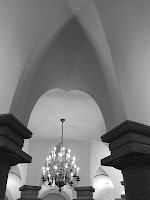 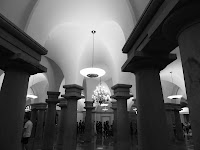 Next photo is standing in the center of the rotunda (where dignitaries lay in State) looking up into the dome.  The rotunda was truly a thing of beauty to behold.  Can you spot George Washington in the painting at the top? 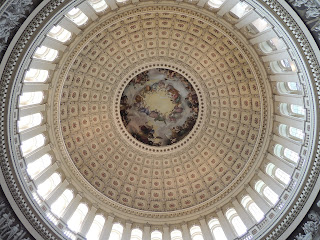 This photo below is a full 360 photo of the rotunda.  I stood again in the exact center (there is actually something that marks this spot at each level) and used the panoramic feature on my camera.  So may paintings, statues, etchings, etc.

The next 2 photos represent an amazing thing.  The picture on the left you will see an arch along the top.  In the picture on the right we are standing at a spot to the right and our guide is straight across on the other side of the room waving her hand.  She is starting to talk in a whisper and it sounds like she is practically yelling right beside you.  As she leaves this spot and heads toward you, you can no longer hear her talking until she is right beside you.  Something to do with the arch and the acoustics.  Amazing!  Oh, by the way the ticketed tours didn't get to experience this. 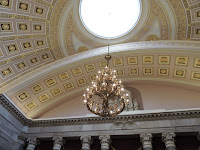 These next two photos are of the Old Supreme Court located in the Capitol.  It was an absolutely magnificent room. 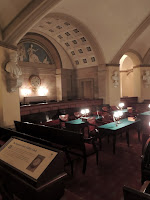 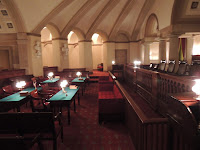 We also got to go in and sit in the Senate Chamber balcony (where the State of the Union Address is given by the President).  You have to go through a second security check to enter this room and a staff person from the Capitol security goes in with you.  Again another place where no pictures are allowed.  I will tell you the room is much smaller than I expected after seeing it on t.v.  Still a beautiful room as were all rooms in this magnificent building.

A couple of others places of note was seeing the audio/visual room where Senator Grassley usually is when t.v./radio interviews are taped.  We also saw where Speak of the House John Boehner's offices were located.  Didn't actually see the office but his name plate on the hallway leading to them.  To end our tour as the Senate was in recess we rode the Senator's train back through the tunnel to the Hart Building and once there we got to see the Senator's Office. 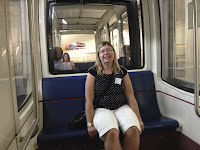 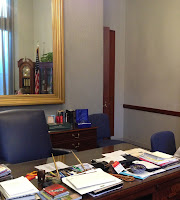 From there - yes there is more but I will keep it very short.  We walked over to the Japanese American Memorial.  Beautiful park area with flowers and a couple of fountains with lots of green space.  After that we walked over to Union Station.  Took a couple of quick photos, had a fast bite to eat and hailed a taxi for the long trip back to the hotel as Bill's back would not make the trip back.  I'm thinking it would have been a trip better taken carrying Bill on my back and pushing Keith in his chair.  This particular taxi driver on a Friday night in rush hour traffic - well let's just say I'm amazed I'm still alive to write about it.  Truly terrifying and I've ridden with Bill, my dad and my younger brother! 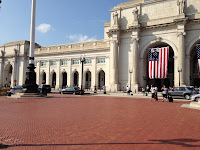 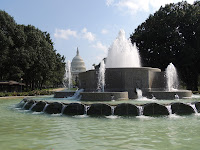 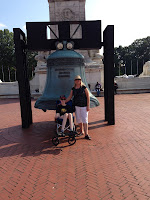