It seems like September has been equally as busy as August this year.  I'm going to try and get a few posts done in rapid succession over the next few days to share my August and September with you.  Today I'm sharing my results from the Iowa State Fair competition and my days spent at the Fair with family and friends.  I decided to take advantage of my Collage App to keep the picture stroll to a minimum. 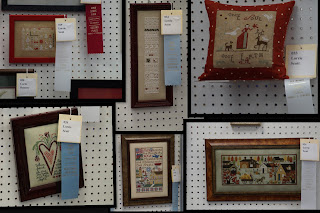 I was pleased to have been awarded 6 ribbons out of 7 entries this year.  I split evenly this year between 3rd and Honorable Mention.  I am not surprised there are no 1st or 2nd place ribbons this year as my projects were so much smaller and had no special things likes beads and metallics.  Still very excited to have 6 out of 7 of my pieces recognized.

I think what was even better was that the comment cards on all pieces contained nothing but positive remarks.  I think this is the first time I have never had one critical remark. 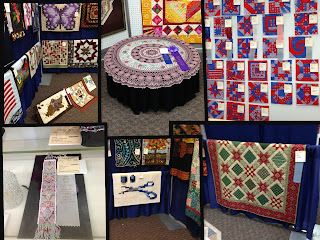 This collage has some other competition things I really enjoyed.  I thought the Best of Show crocheted table topper was amazing.  The upper right is a contest where everyone gets the same fabric and creates a quilt block.  Always so fun to see how different the squares are.  These squares will be used to make the quilt for next Fair's raffle.  I found the quilt with the scissors quite fun. 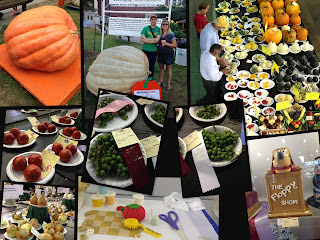 These are photos of food items around the Fair.  My cousin's son and I are standing next to the 1st place largest pumpkin this year (I promised I wouldn't put this photo on Facebook but didn't saying anything about my blog).   I caught them judging some of the vegetables.  The tomatoes looked good enough to eat but would have been a big no no.  The Floppy Show cake was amazing (you have to be from Iowa to remember Floppy).  I thought the sewing theme using fondant was very creative as well. 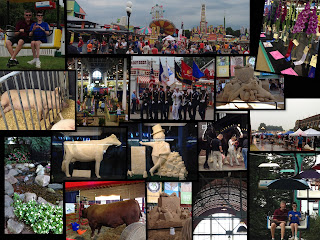 Here are a variety of other things I enjoyed at the Fair.  I love watching the activity around the midway.  Always fun to see the smiles on my guys' faces while riding the sky glider.  I love the judged flowers.  This year with the butter cow they did Monopoly in butter.  There is always the big sand sculpture and it would not be a Fair with out the Big Bull.  I couldn't resist the sleeping pig - he appeared to be smiling in his sleep.  We also were there for the Veteran's Day parade - the service man who attended my father's funeral and gave me the flag is part of this group.  I also caught a morning of horse shows as well. 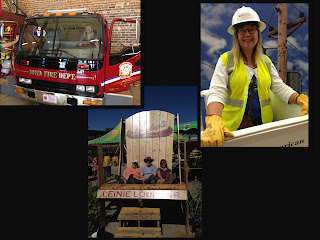 This also appeared to be the year of quirky photo ops for me.  If there was one, I was volunteered for it.  I got behind the wheel of a fire truck, dressed and in a bucket for MidAmerican Energy and put in an oversized chair that made me feel like the Lily Tomlin character Edith Ann.

I hope you enjoyed seeing the Fair through my eyes.  There were tons more photos and things to do but there is only so much one can put in a post. 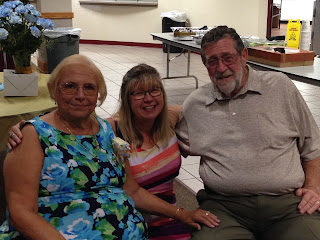 On the 2nd to last day of the Fair I travelled South to Kansas City, MO to attend the 50th Anniversary gathering for this lovely couple.  They are my Aunt Marg and Uncle Larry and they are two of the loveliest people.  Whenever you are around them there is always laughter and joyful fun.  I also value that they are such wonderful listeners and offer such good advice and wisdom.  I love them dearly! 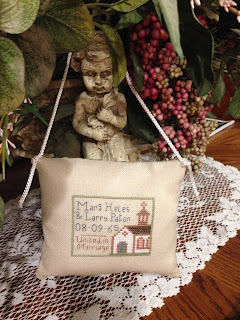 I did whip up this little piece to commemorate their special day.

The last day of the Fair which I am usually at was spent this year attending a first time car show for the Unique Mustang car club.  These car shows I've been attending with my husband and son have been a wonderful place to learn to use my new DSLR camera.  I will share some of my favorites next post.