For the first time in years I was actually up and awake to welcome in the new year of 2013.  I'm afraid it began as 2012 ended.  Hubby is sick with a terrible cold and Keith was up late with the t.v. a bit too loud watching all the New Year's Eve celebrations.   I greeted the new year doing what I like best - STITCHING!  I did make significant progress on a Christmas gift I'm still working on - still need at least another week to get the task complete.

I ended 2012 by making lemonade out of lemons project.  I was trying to make a smaller pillowcase and was a bit off in my calculations - I do know exactly where my miscalculation was so as soon as I buy another bit of flannel I will be able to make it correctly.  So I took my too small pillowcase and stuffed it and closed it up for a toss pillow for Keith.  He was thrilled when he came home from his workshop yesterday and found it in his room.  It is made out of a very soft shirt flannel.

I also received the most amazing gift in 2012 that will make my sewing projects so much easier as evidenced by my little project that took 2 1/2 hours start to finish including the cutting of the fabric.  Yes, I was gifted a Go Baby cutter by AccuQuilt.  I don't want to embarrass this person so won't tell you who it was from but know this person is one of the most generous people I know and it reduced me to tears when I received it.  I will admit my little topper/mat is not perfect as Keith claimed it as soon as he saw the triangles cut out and I just couldn't sew fast enough to suit him which is why my points don't line up.  Fast was preferable to perfect in this instance.  Yes, Teresa, he was a bit miffed it was not his quilt and I did hear about that from him and continue to hear about it.  Next on my sewing to do list but I just couldn't resist trying the Go Baby out. 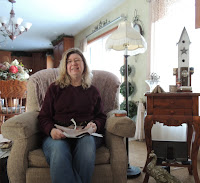 I have started on a few of my goals for 2013.  To be honest my goals are a bit open ended as far as completion.  I don't necessarily have to get to the long term goal but work toward them with more short term goals.  To that end one of the goals I had for this year was to have more photographs of myself.  I noticed when I went to put together the family Christmas card there were only about 4 or 5 pictures with me in them over the year.  I'm always the one with the camera in hand photographing so this year I've started the year with a picture of myself.  I used the timer on the camera so you get a not very imaginative posed picture for my first of the year but at least it is a picture.  My nieces husband tends to roll his eyes when my sister-in-law and I bring out the cameras at our family gatherings - he even referred to us as paparazzo.  I did share with him over the Christmas gathering that I could take 100 photos and only end up with a couple of really good ones.  I'm hoping now we won't get the eye roll when the camera comes out.  I hope my friends will also help me to achieve my goal in this area by taking photos on our outings as well. 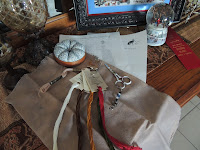 I have my new project all lined up to start today.  It is a small Christmas piece by Isobel at Primitive Hare.  She is a favorite designer of mine (I have 3 or 4) and I'm looking forward to stitching this one up.  I'm saving this start for a bit later this afternoon after I get a few things done today.  Laundry is always on the list but I also wanted to order my book as I have my blog entries printed into a soft cover book every 6 months.  I've lost my blog twice since I started blogging a few years ago and decided to print it every 6 months.  I've been doing this for a couple of years now and do enjoy sitting down and reading in them from time to time.  It is a great journal.

Hubby and I did have date night Saturday night before he got sick.  We saw two movies - The Guilt Trip and Jack Reacher.  Kind of surprised that we like Jack Reacher better.  We didn't think the comedy was as funny as we thought it would be but it did have a nice story to it and the action flick had  more of a story than we expected.  We find we do have a better movie experience we haven't heard to much about it beforehand.  I do want to see Les Mis but that is definitely not on my husband's list - he doesn't do musicals.  I'll have to wait for that one to come out on DVD.

Book club is fast approaching and I've yet to crack the spine on the book for January.  It is called the Invisible Wall.  I did, however, finish the mystery I was reading by Carla Neggers called Widow.  It was a good mystery.  Kept me guessing through most of the book which is unusual.

I'll leave you with a little quote from a list that Bill's Aunt sent - You should always leave loved ones with Loving words.  It may be the last time you see them.