Nothing Compares To The Iowa State Fair!

It seems like it has been forever since my last post and I apologize.  Life has been crazy busy and I was going to sit down Friday night to do a blog post and then became ill.  Bleh!  I just now had a 2 hour interruption - a quick drive up to the hardware store turned into a trip by the fairgrounds and ice cream shop for the guys - LOL!

Since last post there have been date nights, movies watched, books read, stitching finished and started, birthday celebrations (yes I had one left to go), housework done, workouts completed, pictures were taken, new recipes tried, battle for the tomatoes given up and won by the critters, sewing, car rides in the convertible with stops for ice cream and shopping.  I'm not sure that I've covered everything I've done in 2 weeks but this might be enough to exhaust you just reading.

I think I will start off with my post title Nothing Compares to the Iowa State Fair - this year's motto for our state fair.  It is hard to believe that since last post I've delivered my items for judging in the Fabric and Threads Department and according to their timeline judging is complete and display is being readied for the reception to be held the Eve of the fair opening (which is just 2 days away).  As usual, the closer it gets the more excited I get.

It all goes back to when I was a kid and we would go and see the State Fair Parade that is also held the Eve of opening day.  After the parade my parents would drive us by the fairgrounds where all the people who were in the parade got to go into the fairgrounds for the evening and enjoy it before it officially opened.  As a kid, you always wanted to be one of those who got to go in before it officially opened.  I have to say entering in the Fabric and Threads was my ticket into this "club" and it makes me feel just a little bit special getting to "sneak" in before the official opening day.

This grouping of 6 are my entries for this year's competition.  If you are wondering, yes I was working almost until the last minute getting my things ready.  See the pillow in the upper right corner - decided to put that together the afternoon before the entries were due on Saturday.  I had to fabric shop, cut out, sew and stuff it Friday afternoon.  I didn't get to any of this work until after 1:00 p.m. and had to have it done before Keith arrived home around 3:00 p.m.  I think it doesn't look to bad for a 2 hour project. 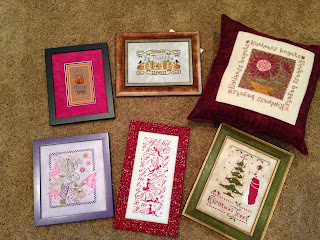 Here are a few photos from the Saturday Keith and I took them out to drop them off.  Keith wasn't too sure about leaving all that work with the ladies behind the table but with promises we were headed to the coffee shop for vanilla chai teas he quickly forgot his worries. 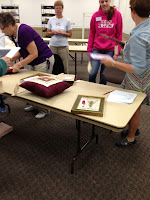 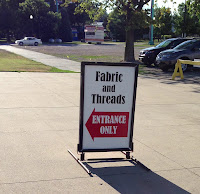 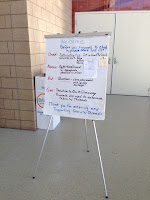 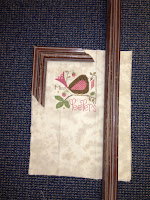 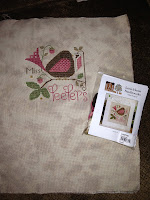 Now that my pieces are off for judging I've picked up some pleasure stitching to do.  I quickly finished Miss Peepers by Little House Needleworks.  I will point out the actual design is a little different than the photo on the front and I chose to stitch it from the graph rather than the photo.  I also added backstitching to the pages of the book as I didn't feel like the color popped off the fabric enough.  I changed all but one color from the original.  I have since dropped it at the framers and have chosen this brown frame that has a rosy hue in it  I can't wait to see it finished.

The fabric is an over dyed "oops" fabric.  I will list the called for threads and then my choices. 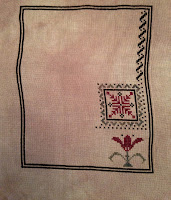 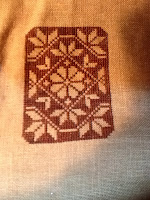 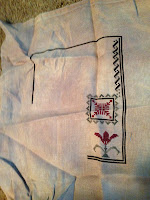 Another finish was this little quaker motif by Milady's Needle.  It is destined to be a key chain in the very near future.  I then picked up a piece I started several years ago by La D Da called Live Laugh Love.  The first picture is where I left it a few years ago and the 2nd photo is all the stitching I completed on Saturday evening.  Very pleased with my progress and expect it will be a finish in the near future. 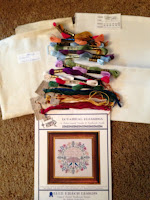 Next start I have planned is Botanical Blessings by Blue Ribbon Designs.  I fell in love with this design when Belinda taught it as a class and am thrilled she chose to release it for those of us who could not attend the class.  As you can see, I've pulled the colors.  This led to 2 hours of sorting colors and putting them away and with all the hundreds (in reality probably thousands) of threads I have I came up 3 short.  Pulled out my trusty DMC floss chart and substituted colors I had on hand that closely matched the called for colors.  Now I'm trying to decide between a piece of 25 count Jobelan in off white or a 38 count of Rivera linen in ivory.  Decisions, decisions.

I thought Teresa (atwillowtreepond) would enjoy seeing her childhood tea set (she gifted to me in an exchange at Christmas) in its' new vignette.  I take advantage of house cleaning to change a vignette or two each time to have a new look.  The box it is sitting on was made by her as well.  Thanks again, Teresa as I'm enjoying it. 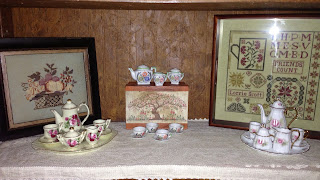 While out shopping for fabric to make my pillow for the Fair I happened upon a new bobbin box that I really like.  It holds 30 bobbins (including the minis from HDF) just perfectly.  I like to keep bobbins for my sewing machine filled in many different colors of threads so I can just grab whatever color I need without having to fill a bobbin each time.  I also like that they stack very nicely one on top of another. 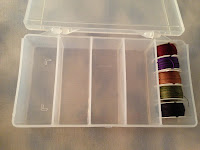 This is one of the little critters that was having a field day with our tomatoes.  It got one tomato but we gave up the fight when the big critters from the park were having a feast at night while we slept. 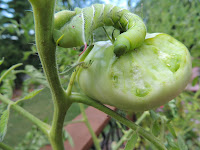 I big thank you to Mindi who sent me a text about the gorgeous big moon a couple of weeks ago.  Thanks to her text I went out and took the most amazing photo of the moon. 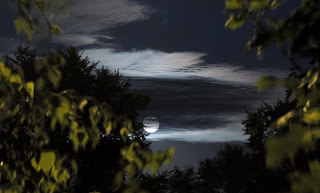 Well, I've not yet touched on books read or the recipe for the BLT salad but promise to get to those in my next post - which will be done in a more timely manner.