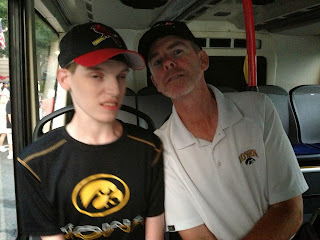 I'm really going to push myself here this afternoon and try and finish up all the vacation posts this afternoon.  I want to get back to normal posting but want this all finished up first.
The previous post told you what we did during the daylight hours of Day 3 so here is a quick little post about the after dark hours.  After a long day of walking in the heat to tour the outside of the US Capitol as well as the Exhibition Hall, Library of Congress, Supreme Court Building, Senate Building, Japanese American Garden and Union Station we decided on a whim - believe me it was on a whim - to take the night bus tour around D.C.

It really did sound like a good idea and by the end of the evening we all really did have a good time.  Although you might not guess that by looking at this photo of my guys.  Honestly I don't know what Bill and I were thinking as Keith is ready to settle down for the night by 8:00 p.m. and we needed to board the bus by 7:30 p.m.  Keith was a bit grumpy (putting it mildly) about taking this bus tour and wouldn't go up the stairs to the open air part of the bus.  I know Bill would have liked to been up there but sometimes you just have to pick your battles and let's be honest we were all tired already.

First stop on our bus tour - Union Station - TO GET ON A NEW BUS!  Yes folks as our luck runs the sound system on the bus would not work and it is pretty hard for the guide to tell you about what you are seeing without it - especially as there is only 1 guide and 2 levels to the bus.

We finally were on our way!  The tour really was interesting and it was nice that at 2 locations we were able to get off and walk around the monuments.  To be perfectly honest the monuments are so much more beautiful at night all lit up.  By the time we got to the first stop which was the US Capitol the driver let any of us on the 1st level go up to the open air part of the bus.  Keith was still having none of it but Bill sent me up with my camera to get the good photos and he and Keith enjoyed a wonderfully air conditioned ride.  Lucky for them they were first off the bus at all our stops so had more time to enjoy the monuments that I did.

I hope you will all forgive the quality of my night photos.  The bus was in constant motion and I was photographing behind 2 rows of people on the other side of the bus most of the time.  I feel pretty fortunate that they turned out as well as they did.

Here we have a picture of the U.S. Capitol and the World War II Memorial. 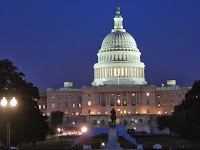 Here we are driving by the Jefferson Memorial.  I love how this one turned out with the trees in the front of the picture. 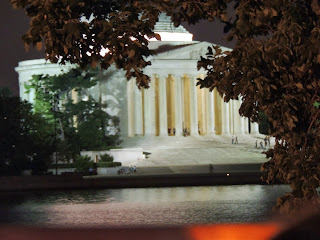 We did get to enjoy about 35 minutes at the FDR Memorial and the Martin Luther King, Jr. Memorial.  You walk within a foot of the Tidal Basin to get from one to the other in the dark.  I'm amazed that no one ended up in the basin as there is no railing along it. 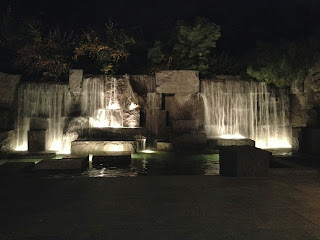 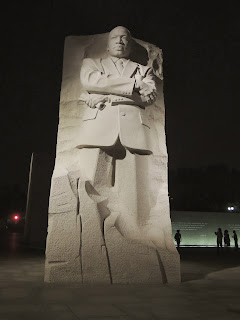 This is the Jefferson Memorial looking across the Tidal Basin as we walk from FDR to MLK memorials. 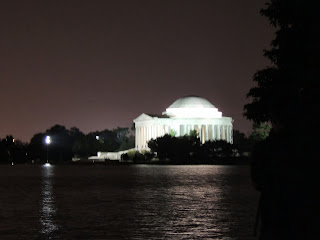 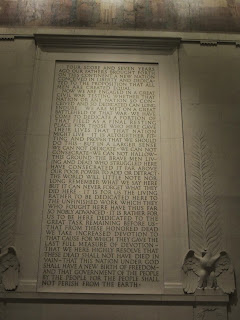 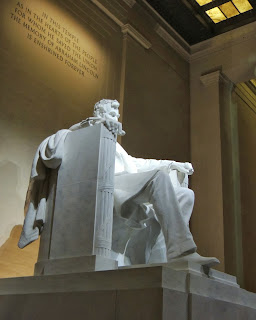 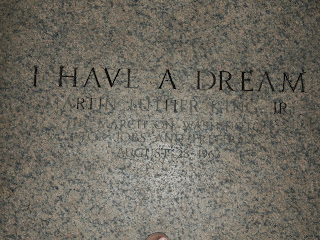 We also drove by Arlington National Cemetery.  I will say the quality of this photo is atrocious but I was still thrilled to have gotten it.  I captured the Women's Memorial (bottom), the eternal flame (middle) and Arlington House (top) all in one photo at night.  This was amazing as the bus never stopped and most people were never able to pick out where the eternal flame was.  I got lucky and managed to snap the photo when it was flaring brightly. 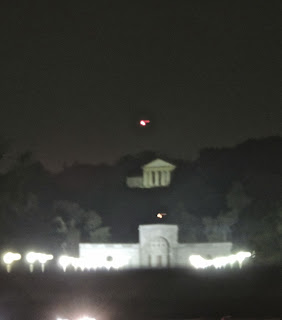 We finally arrived back at our hotel at 11:15 p.m. and fortunately for us that was their first drop off spot.  Many of the others still had to wait for another stop and then get on the Metro to get back to their hotel.  The trip was well worth a "grumpy" Keith.