Originally we were going to go to Arlington National Cemetery but let ourselves get talked out of it by  a Hotel Management person.  He recommended the Smithsonian Museum of the American Indian.  He said it was phenomenal - boy was he ever WRONG!  I've seen much better exhibitions here in the Midwest and it was totally not what I would have expected.  We did, however, go through all levels of the exhibit.  I found one stitching related item.  This is a Mohawk pincushion (1900).  I'm wondering about the swastika on this and am thinking I see some research in my future - that is unless someone can enlighten me.  I've only seen this associated with Germany in the late 1930's and beyond. 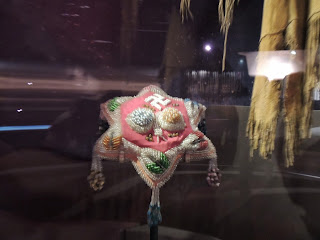 After this museum we went back over to the Air and Space Museum and took in a double feature at the Imax Theater.  Really enjoyed the 3D movie (Hubble 3D) but the other not so much.

From here we took a cab over to Printing & Engraving (you will remember Bill's back done) only to find it closed until Tuesday.  The Holocaust Museum was right next door so we decided to go there instead.  Not a museum for the soft hearted.  I was pleased to see that they had concrete walls in front of the t.v. screens showing things children should not see.  It was terribly crowded so were not able to see the exhibits very well.  I will, however, never be able to forget the smell at the shoe exhibit nor pile of scissors and utensils left behind by those who were executed. 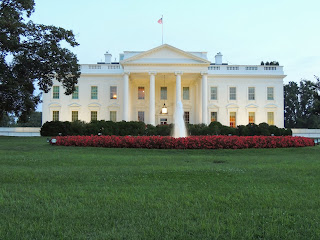 To finish off this day as we were staying in the next block from the White House we took our nightly  stroll around it.  This was the night I noticed the Secret Service on top of the White House.  I also took the time to find the garden planted by the First Lady.  Is it wrong for me to admit that I was a bit underwhelmed when I caught my first glimpse of the White House.  I was expecting something so much larger.  It looks so much bigger on television that in person.  Still a beautiful building! 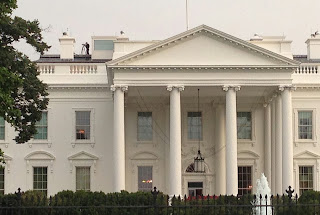 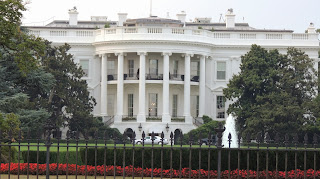 Now this is a magnificent building next to the White House.  This is the Dwight Eisenhower building.  The first picture is just the side of it.  Second picture is from the corner looking down the front.  I could not get the entire front of the building into the picture is was so HUGE! 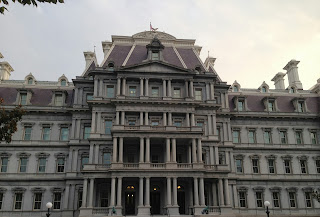 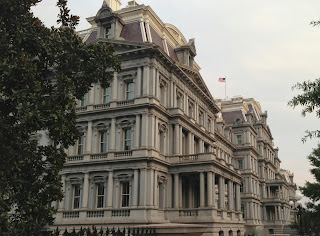