Where Did My Afternoon Go!

I had plans to get this post done hours ago but my time this afternoon has just zoomed away.  Thankfully it is going to be a night of leftovers for supper so I have a few minutes to post a quick update.

I realized it had been awhile since my last post as I've picked up two completed pieces from the framer.  Funny how you have good intentions and then the next thing you know a couple of weeks have gone by.

I thought we were going to make it through the entire Winter season this year without my son getting sick but alas it was not to be.  He has been home off and on over the past 2 weeks nursing a cold/cough.  I think the worst symptom has actually been the cough.  It really seems to get going at bedtime and then we miss hours of sleep trying to get him settled. 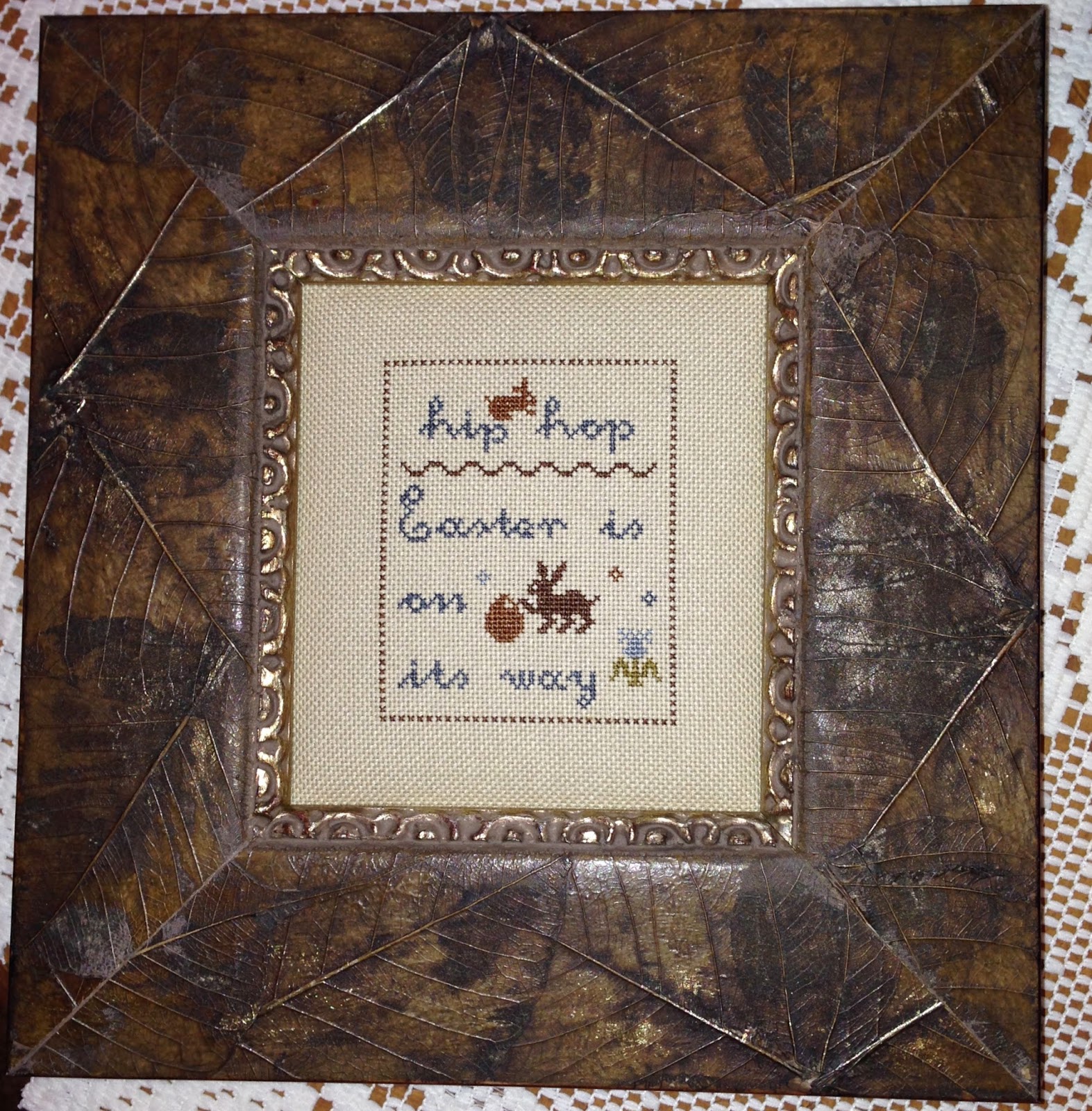 This is Hip Hop Easter by Nathalie (TheBlueAttic).  I stitched it to be a small design as I had in mind using a large width frame to showcase it.  The frame I chose has various shades of the same thread colors I used and it turned out just as I had envisioned.  Imagine that!  The finished size including the frame is 8 1/2" wide x 9" high.    This was a start to finish stitch in one afternoon. 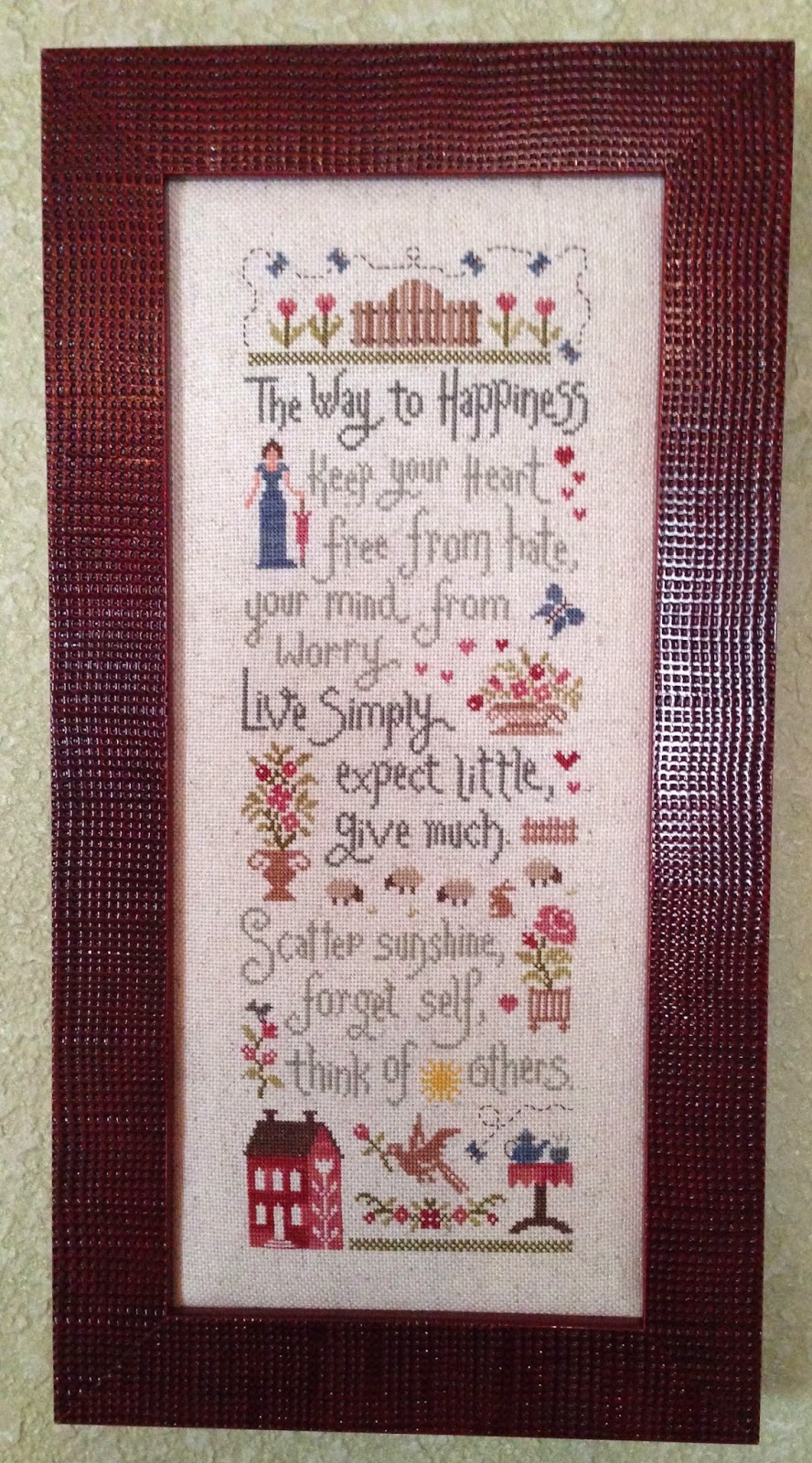 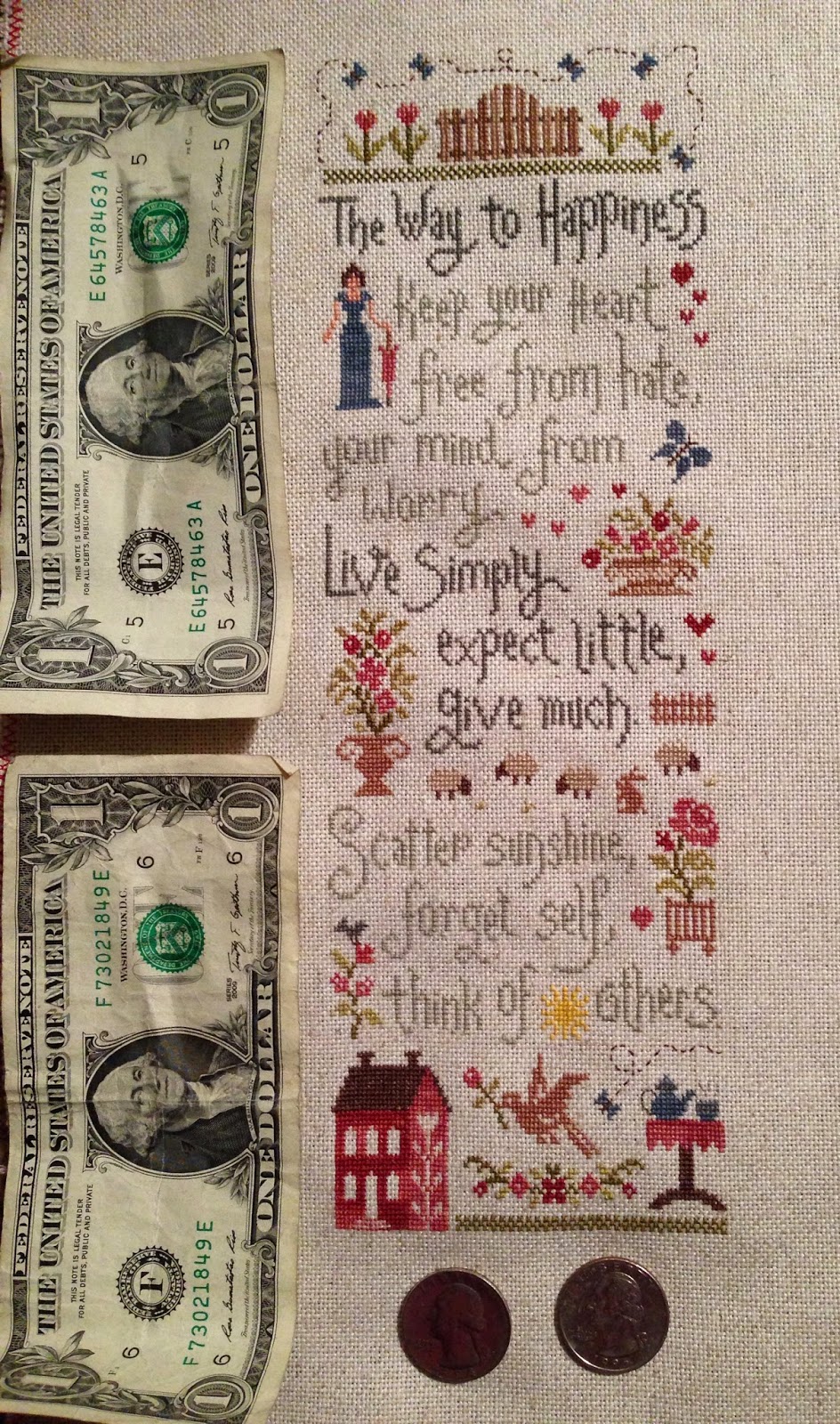 I also completed La Pensee' Positive by Les Marottes de Nathalie.  I actually thought this design would take me much longer to stitch than it did.  I usually take a photo after each session I stitch on a project to see it evolve and so I have a visual of progress made and was surprised to realize it only took 9 stitching sessions to complete.  I did try several different frames for this piece but the frame I used on Sampler aux Bouquets where I used the same fabric and many of the same threads was still the one that showcased it best.  I did change several of the called for colors so I could use the same threads but kept the colors charted for the words.  I also chose to completely stitch the tablecloth rather than just outlining it.  The finished size including the frame is 7 1/2" wide by 14" high. 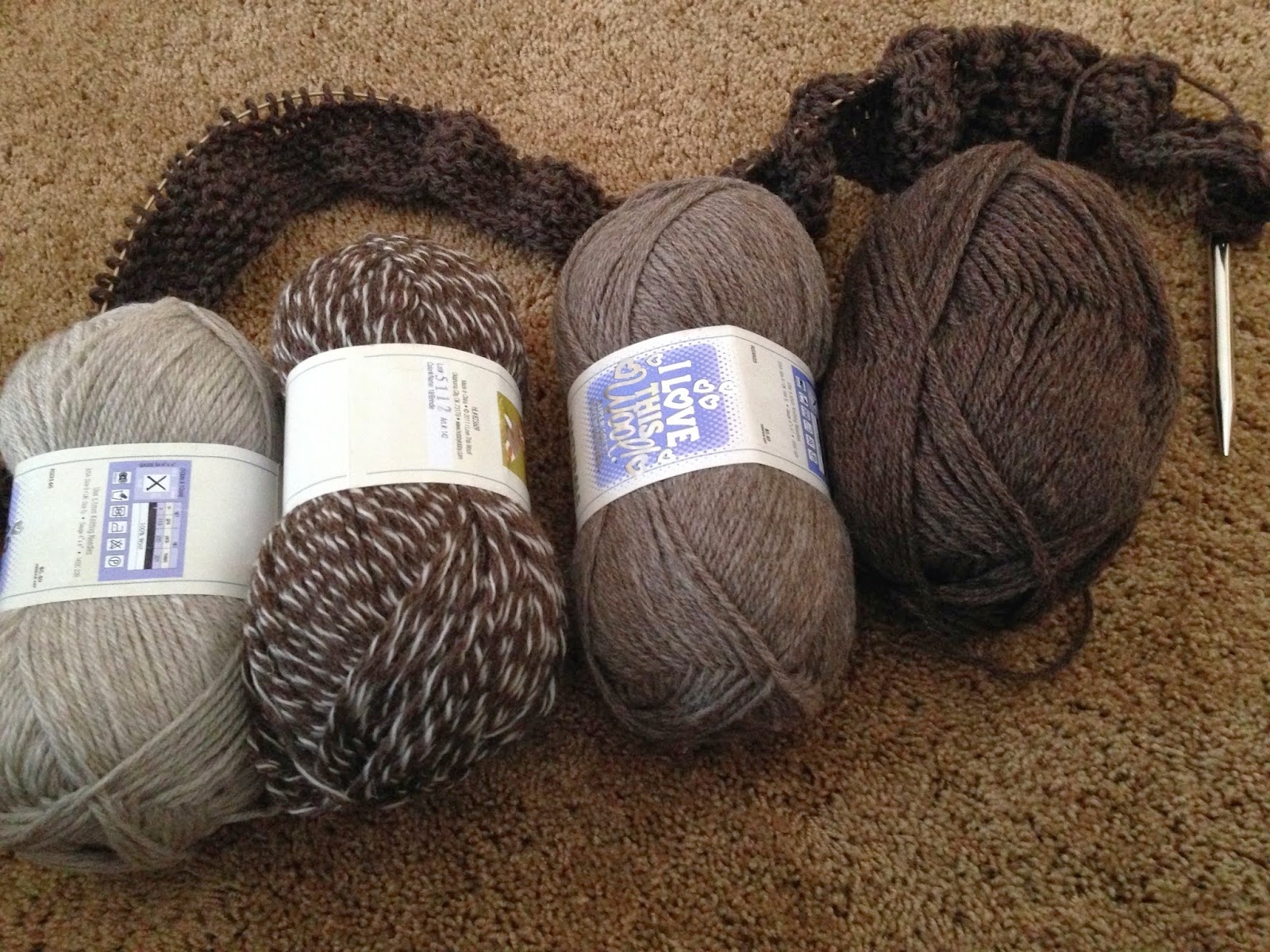 I'm still knitting away on my afghan using the washable wool yarn.  I don't get as much time in on this project as I like stitching so much more.  However,  I'm about to move onto a new color so progress is happening. 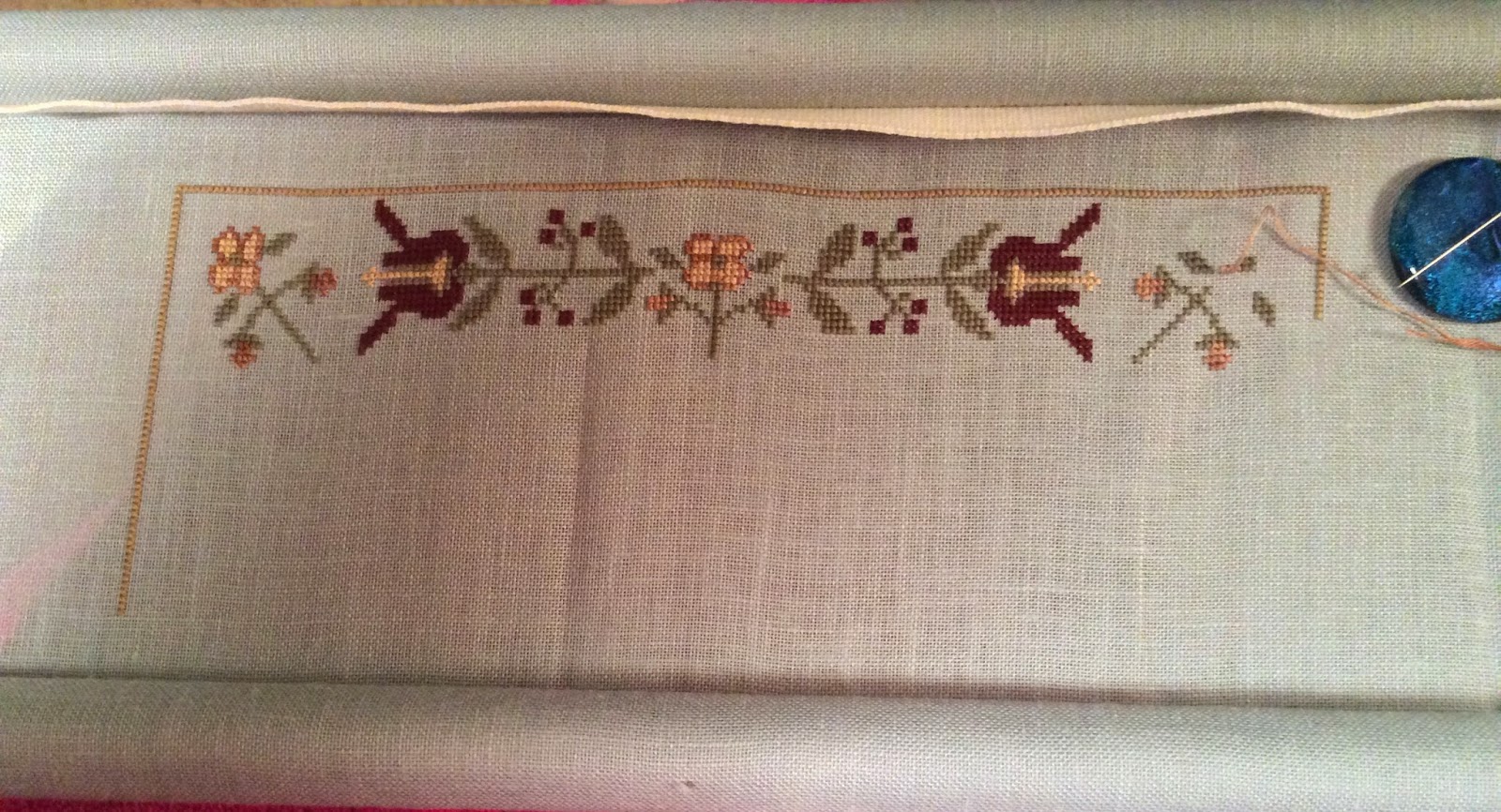 I have picked up the Mystery Sampler by With Thy Needle again.  I started this over a year ago but detest working with colored patterns so put it down never to see the light of day again for a VERY VERY long time.  It came to mind again as this was about the time I put it away last year and decided to have a go at it again.  I'm pleased to say I'm dealing with the colored pattern better this year - mostly because I'm cutting it in small sections to work from.  I know I still hear the gasps of horror.  I just figured I paid for it I can do what I want to it.  I've made significantly more progress than the picture shows but I've just not had time to snap another photo.  The fabric is much more blue than this picture shows and will try to get a more accurate read of the blue in the next photo.  I believe it is a 30 count Quaker Cloth but I won't commit to that just yet.  I changed most of the colors as well so they would be more compatible with the fabric color.  I promise next post I will give better details of fabric and threads used.

I did manage to attend my Compass Club book group a week ago although I did not finish the book.  Many of the longtime members were in attendance so it was fun to catch up with everyone.  Next month's selection is Far From the Tree and is 700 pages long - gulp!  Other members are already talking about just reading the sections that they feel pertain more to their circumstances rather than the entire book.

I also attended the Compass Club needlework group this past Tuesday.  It was my first time attending this group as it meets in the afternoon and I don't have much time to participate as I've my son's bus to meet.  I did manage a very relaxing and enjoyable hour with the ladies and am thinking I might just work this into my schedule as it only meets 1x per month.

I don't know if anyone else saw the Lizzie Kate Contest for suggestions for favorite quote for her to design next.  I did enter the contest but did not get my quote picked for voting.  However, it has inspired me to pick up my graph paper and pencil to create a design for my favorite quote.  It is not one I anticipate any designer will do anytime soon so I figure I am going to have to design this one myself.  I will now be on the hunt for a good alphabet and some motifs to put on it and maybe a border.  I'm thinking I want it to have the feel of the Positive Quote I finished (you know Victorian Lady, maybe flowers, teapot/cups).

A woman is like a tea bag - you never now how strong she is until she gets into hot water - Eleanor Roosevelt.