I'm just going to say right off that as hard as I fought I've finally succumbed to one of the viruses brought into the house this Season by the guys. It was bound to happen and I have Keith to thank for this. I don't have a stuffy head but my sinuses re sure draining down my throat and coughing is the activity of the day. Can't say which I would rather have the cough or stuffy head as they re both awful. Right now it feels like cough is the worse evil as I've been up since midnight doing just that.

We lucked out with less snow than forecasted Thursday to Friday. Still 6" is a lot of shoveling on a 3 car driveway when your snowblower won't run. It was an early 5:30 AM start to this big job as I need to at least clear a path to the road for Keith to get on his bus and I have only until 6:15 before I have to wake him and get him ready to go. Managed to get 3/4 of it done encore I had to take a break. Finished it up after Keith was on his way. Gotta say it sure wakes you up in a hurry that early in the morning. Kind of felt like I had done a days work by 8:30 AM.

A little later in the morning I slipped out to my LNS to pick up a couple of threads I need for The Primitive Hare's Red Riding Hood I started the other day. It is coming along quite nicely. I've stitched the top rows across the top. I know it doesn't look like much yet but those rows are 155 stitches each so a good amount of stitching has been done. I'm looking forward to getting to Red Riding Hood's cape. I purchased a piece of Isabella's Old Massachusetts linen (40 count) to stitch it on. It is a dream to stitch on so if you have considered buying a fat quarter of it I would. I did decide to use the Gentle Arts colors for the red and brown rather than the DMC. I though the movement in colors would be more realistic. 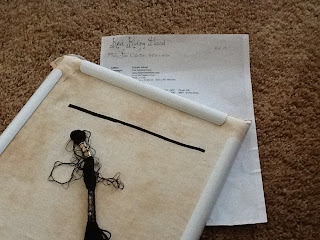 Keith and I have already been out on this sunny Saturday to my hair appointment and then the coffee shop. After emptying the dishwasher and setting a load of laundry to wash decided to see if there was an app to be able to update my blog on my iPad. Was thrilled to see Google does have a free app to use so I downloaded and decided to give it a try. I have a feeling I will still want to use my computer for picture heavy posts but think this will be a great option for short updates.

Tonight is date night and our plans are to see Silver Linings Playbook. I'm surprised it is still playing in the theater as it has been out for quite awhile. Looking forward to seeing it.

Well, of to get the "must be dones" accomplished to I can enjoy my night out.